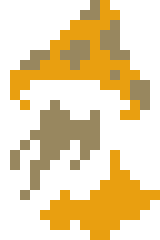 Is it a coincidence that the knotted, erumpent throng of organ that is Pax Klanq is shaped in the vague form of a humanoid, or is the prodigy fungus welcoming his extradimensional anthropoid visitors with a warm gesture? In either case, his splendid orange cap looks like a fancy hat. The semblance ends there, however; in place of a face, there's only a trio of undulating tentacles.

At the edges of your field of vision, more tentacles writhe over tools, books, circuitboards, frog cadavers, and saltwater pearls. You realize just how many things Klanq does at once, and you wonder at Nature's decision to bestow peak organic wit to a fungus.

Pax Klanq is the only unique member of the fungi faction, and serves a key role in the game's main questline. As

Barathrum the Old describes him, Pax Klanq is an "eccentric mushroom prodigy" and "a brilliant scientist and engineer."

After the compound at

Grit Gate suffers an attack from the Putus Templar,

Pax Klanq resides in a hut made of

mushroom flesh in the

Rainbow Wood, but the path to his home can be found only after consuming the