From Caves of Qud Wiki
Jump to navigation Jump to search
This information is reliable as of patch 2.0.201.114. If this is no longer the current patch, you can help by updating it.

Missile weapons are one of three core weapon classes in Caves of Qud, along with melee weapons and thrown weapons.

Missile weapons include any weapon that can be equipped in a Missile Weapon body equipment slot and fired at targets using the Fire missile weapon keybind.

The first component to a missile weapon attack is determining the trajectory of any projectiles.

There is an element of randomness and several calculations at play which ultimately determine the angular variance of an individual missile weapon projectile. The simplified formula for angular variance is:[1]

The ± symbol indicates that AimVariance is randomly either added or subtracted from WeaponVariance.[2] 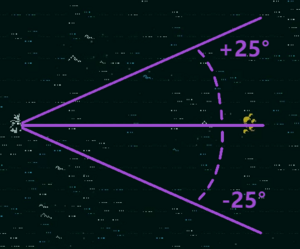 In the equation above, WeaponVariance is the weapon variance roll, which depends on the weapon's intrinsic accuracy and is re-randomized for every projectile. In game, a missile weapon's accuracy is noted in its description as Very High, High, Medium, Low, or Very Low. For easier calculation, this wiki also includes the numeric accuracy value associated with each missile weapon in the infobox on that weapon's wiki page. Lower values are more accurate, with 0 representing a perfectly accurate weapon (for example, the

Each time a projectile is fired, the weapon variance is randomly chosen from -WeaponAccuracy to +WeaponAccuracy. For example, the

blast cannon, which has an accuracy of 25, will always contribute a random number from -25° and +25° to each of its projectiles, representing a total angular variance range of 50°.[3]

The only thing that can modify weapon variance are relic and extradimensional enhancements which reduce a weapon's base accuracy by 5-105-10 (Avg: 7.5). Weapon variance is not influenced by any other factors. It cannot be reduced by agility, skills, or tinkered weapon mods. For example, the blast cannon will always have, at minimum, a -25° to +25° spread, unless it is a relic or extradimensional blast cannon that had its base accuracy reduced. 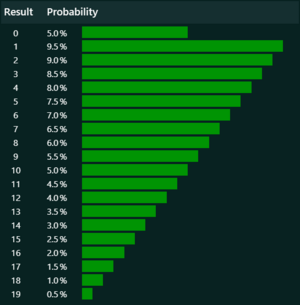 Each projectile fired is additionally affected by the wielder's aim variance. AimVariance begins with a standard 2d202-40 (Avg: 21) dice roll shared by all missile weapons. The value can then be modified by attributes, skills, weapon mods, and other factors, and it can sometimes be reduced to 0.

In the following cases, aim variance is always set to 0.

Otherwise, the general formula for aim variance is as follows.[3]

Aim variance cannot be negative - if the result from following these steps is negative, aim variance is set to 0.

In the case of a shot gone wild (which occurs 50% of the time when there are two or more enemies immediately adjacent to the shooter), or if the player is sprinting while firing a missile weapon, an additional random angle of up to 23° in either direction (-23° to +23°) is randomly added to the calculated angular variance of the projectile. This can stack if the shooter is sprinting while they fire a wild shot.[3]

The firing-while-sprinting penalty is negated in either of the following scenarios:[3]

After calculating the angular variance of a projectile, the game also adds any additional fixed spread projectiles. These include:

This article has information that is missing or not up to par.
Reason: This section needs more info about how the "Hit" mechanics work for missile weapons, and possibly a little cleanup. Also, info on damage calculations is not found in the linked penetration article, as claimed. Rather than adding it there, it might be better to explain the damage calculation here for a ranged weapon & ammo, similar to the example in the Melee weapon combat article.

After a projectile actually hits a target - whether or not that was the intended target - regular damage calculations occur. However, there is a -5 DV penalty. If the target has Swift Reflexes, the penalty will not be inflicted. If the creature is immobile, the DV is set to a flat -100.

For information about penetration and damage calculations for missile weapons, refer to the penetration article.

This information is reliable as of patch 2.0.201.114.
Retrieved from "https://wiki.cavesofqud.com/index.php?title=Missile_weapon_combat&oldid=78096"
Categories: