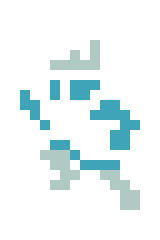 Thatched together out of scrap metal, they teeter. What was the artist and maker thinking while banging metal into a likeness? They occupy a point between poles on several axes: halfway between chimp and human, halfway between child and adult. They are small, and there are shadows under their chrome cheek.

A chromeling is a robotic creature belonging to the Barathrumites faction. Chromelings are primarily found in

Chromelings begin neutral to the player, but will become hostile if provoked. They always come equipped with a

stun rod, slotted with a zone tier based energy cell at 100% charge, which they will utilize in combat. The stun rod is a cudgel weapon that deals

This information is reliable as of patch 2.0.201.75.
Retrieved from "https://wiki.cavesofqud.com/index.php?title=Chromeling&oldid=79662"
Categories: