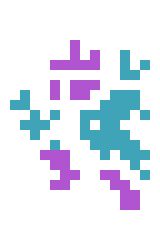 Shem has augmented their body beyond the chromeling's basic form by welding on a dissymmetric ruffled coat of scrap metal. It's too big and grandiose for their little figure, but Shem shuffles about confidently, as if they expect to grow into it.

Grit Gate.[1] They are a modified

Shem -1 is one of many chromelings that inhabit Grit Gate. Unlike other chromelings, however, Shem -1 is named and is capable of speech, and distinguishes themselves from other chromelings by wearing a large coat made of scrap metal, which is welded to their body. Shem -1 claims that they were called "Shem 2" when first created by "Father and friends", but eventually realized that they were "not what [they] could be", and "downgraded" themselves 3 times, hence their current title.

Shem -1 appears to be naive and childlike in nature; however, they also seem to be generally insouciant, and when asked if they are concerned about their downgrading, they simply reply: "It's unclear to me that I should be."

Shem -1 seems to enjoy being read to, as they will sometimes ask the player if they would like to read them a story, and mentions that

Neek does so on occasion.

Hortensa states that Shem -1 has "such a wider view of the world" than the other Barathrumites.

Shem -1 is nearly identical to a normal chromeling, and like them always comes equipped with a

stun rod, slotted with a zone tier based energy cell at 100% charge, which they will utilize in combat. The stun rod is a cudgel weapon that deals

Unlike other chromelings, Shem -1 has a Quickness value of 150, allowing them to perform almost all actions significantly faster.