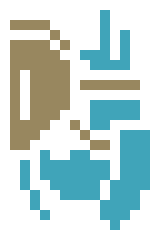 Skimming the underbrush, sailing on air, a shiny ooid of perfect chrome reflects the dim light peeking through the canopy's braided tresses. A larger version of the knit mask worn by the Naphtaali rootdwellers adorns their surface in imitation of a face. They rotate with specious purpose.

A chrome idol is a robotic creature belonging to the Naphtaali tribe and robots factions. Chrome idols are commonly found in the

Usually, chrome idols possess no equipment or weaponry of any kind, and will simply attack with their manipulators, which are equivalent to their fists.[2]

Chrome idols will always be accompanied by several members of the Naphtaali tribe, who will be followers to the chrome idol. The number of members will be random, and when a chrome idol is spawned, the chosen members will be spawned and randomly distributed around the chrome idol in a 4 tile radius; members cannot be placed in non-passable tiles, such as those occupied by walls, and the number of such tiles nearby can result in less members being present than there would be otherwise.

The number of members are as follows. Members will be spawned in this order and placed in nearby cells until all members have been spawned, or there are no remaining valid tiles to place them in.[3]

All chrome idol heroes will have the following:[5]

This information is reliable as of patch 2.0.201.87.
Retrieved from "https://wiki.cavesofqud.com/index.php?title=Chrome_idol&oldid=76293"
Categories: